I recently received these Raggedy Ann and Andy Dolls. They sure brought back memories of my childhood! I remember my grandmother reading us the story of Raggedy Ann and Andy and the Camel with the Wrinkled Knees, at bedtime. Each time she finished the book, we would ask her to read it again. In the tiny town I lived in there was no library, and books were scarce.

Raggedy Ann and Andy were popular dolls all through the 20th Century. Many of these dolls were made by the Knickerbocker Toy Company from 1963 – 1982. Raggedy Ann came with various print dresses, but always had her white apron with a hanky in her pocket. 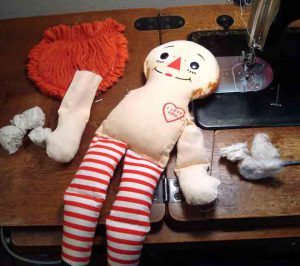 These Raggedy Ann and Andy dolls were both soiled and had various problems between them. I surface washed them both, but their hands were so stained that I had to take them off and un-stuff them to get them clean. Raggedy Ann has a music box. Around the wind up key, her back had become torn, so I put a patch under her cloth and repaired the hole. Andy had a wig problem. It had come off and someone had used a glue that turned brown to glue it back on, leaving brown marks on his face. I was able to get the wig off, clean it, and remove most of the glue before gluing his wig back in place.

I was fortunate in being able to find original tagged clothes for both of them as Raggedy Ann had only her dress, and Andy had only his hat. Raggedy Ann’s dress is a red print variation of the more common blue and pink floral. All the clothes were really soiled, needed some mending and all the elastic had to be replaced. So it was a chore, but these Raggedy Ann and Andy dolls look really sweet now. 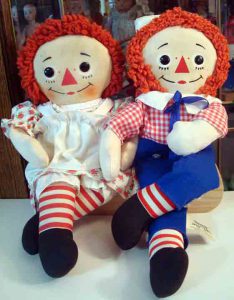 Here is an article about the ever popular Raggedy Ann and Andy Dolls. http://www.dollinfo.com/raggedys.htm